Women Serving Their Country – In the Military and in Political Office

How can you not love that phrase? And it’s going to be invoked a LOT in the next election cycle, particularly considering the record-setting number of women candidates who have already filed. 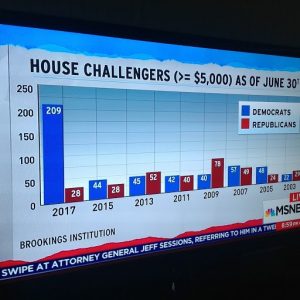 This graphic is such a brilliant indicator of how energized Democratic Congressional candidates are. Already 209 candidates have qualified and filed, a stark contrast to 2009, after President Obama’s victory, when only 79 Republicans were so crazily fearful that they felt obligated to run.

Among these Democratic contenders are an exciting new crop of women candidates. While it’s hard to find overall numbers, in Virginia alone 61 women sought a seat in the Virginia legislature – roughly 30 percent of the field.

In my experience many of these women are coming from a brand new place, and that sentiment is echoed by Stephanie Schriock, president of the national political group Emily’s List (which generates and directs financial resources to women running in key districts), who told the Washington Post, “I think there’s been a real empowerment of women to step up and want their voices heard in all aspects of society, and that particularly means elective office. There are many reasons — one clearly is the election of Donald Trump and what that means to a lot of women in their gut who say, ‘Wait a minute, if that can happen, I’ve got to take charge and get involved myself.’ ”

Of course, that doesn’t even take into account the dozens whom I am sure are currently “testing the waters” without filing. Those women candidates may be holding informal coffees and listening tours, which is permitted until you officially announce “I’m running for office. I’d love your (monetary) support.” Then once you’ve raised $5,000 or more, things get real and you have to register with the Federal Elections Committee.

A New Breed of Women Candidates

One fascinating trend I’m seeing is women candidates with military experience. In the 115th Congress, just under 20 percent of the members were military veterans, including two women each in the House and Senate, which is pretty impressive given that it wasn’t until 1948 that Congress passed the Women’s Armed Services Integration Act granting women permanent status in the military and not until 1991 that women were authorized to fly in combat missions.

Here are three candidates whom I am particularly excited about as they represent the new face of political service, born out of military service.

Currently running for California’s 4th District, Jessica knows more about national security than even most active duty military, due to more than 10 years with the Defense Department, State Department and USAID (United States Agency for International Development). While she wasn’t a combatant, she has sat in some of the most dangerous places in the world (including Bagdad at the peak of the ), working to resolve conflicts. And now she’s running against entrenched political incumbent (this is not a compliment, BTW) Tom McClintock.

A combat helicopter pilot, MJ served three tours of duty in Afghanistan and is currently running for Congress in Texas. Her riveting book, “Shoot Like a Girl: One Woman’s Dramatic Fight in Afghanistan and on the Home Front,” tells the tale of her military service, including being shot down and wounded on a rescue mission, for which she received the Purple Heart and Distinguished Flying Cross.

Retired Marine Lt. Colonel, the first woman to fly an F-18 in a combat mission, Amy announced her candidacy with an awesome video that tells her tale of persisting, even when at the age of 13, her Congressman answered her letter about her dream to fly fighter jets with the news that “women ought to be protected and [are] not allowed to serve in combat.” She is running in Kentucky’s 6th Congressional District.

In addition to Morse, Hegar and McGrath, Chrissy Houlahan is another military veteran running as a Democrat for the House of Representatives.

( https://www.chrissyhoulahanforcongress.com/ )In all there are currently 20 military veterans running for office (women and men), and the Democratic Congressional Campaign Committee expects about 15 more to announce before the end of summer.

These women who are stepping in to run have said they feel compelled by their duty and oath to protect the Constitution, which they consider to be under attack.

And I’ll admit, this ardor and passion for the Constitution really caught my attention – gave me chills!

I have had the honor of meeting a number of women considering candidacy, after creating and leading the session for campaign compliance training for 2017 Emerge California, the non-profit group grooming women to run for office. These women, who are determining whether they want to throw their hat in the ring, were engaged, asking bright questions, and thoroughly impressed me with their desire to positively impact their own communities.

Currently in California, women hold about a quarter of seats in both the state Assembly (17 out of 80 seats) and state Senate (nine of 40). I predict the number of women candidates continuing to escalate. And boy will it be fun to watch!

I have a great deal of hope when I see the commitment and level of passion that this new level of women candidates is displaying, and I think we can all be optimistic!